No products in the cart.

Please complete this form and send your product(s) to:

Upload your favourite fishing pics, tell us a good yarn and you might get your story posted to our Facebook page or fishing gallery!

Get Your Free Seahorse Brochure or DVD

Please complete the form and we will send you a FREE brochure and/or DVD. The GPS seahorse is the only Kontiki which will go where you point it. The built-in automated GPS controlled autopilot system will steer your Kontiki in the direction you want. No need to adjust for side currents or worry about large waves knocking it off course, a simple swipe with the magnet to set, and it does all the hard work for you, ensuring a perfect set each time. The GPS-controlled Autopilot in the GPS Seahorse uses technology developed by the Team at Seahorse to give the user ultimate control over the direction of their Seahorse Kontiki. Simply point it in the direction you wish it to travel in, and when ready, swipe the magnet over control, and the course is set and that’s where it will go. Once launched, the GPS-controlled autopilot will steer the GPS Seahorse along that course. If there is a side current, the autopilot will adjust and steer the Kontiki into the current, so the selected course is maintained. If a wave knocks the Kontiki off course, then it will be steered back onto the course.

This will allow the fisher to tackle large surf with the knowledge the GPS Seahorse will go straight out where they wanted. It’s the same with the busy East Coast Beaches. The Fisher can confidently launch knowing their Seahorse will go where they pointed it. You will also be able to target specific areas of seabed to improve your catch.

Seahorse has used a unique patented combination of compass and GPS technology to make the most accurate Kontiki autopilot ever!!. It is the only one that will go where you point it. Based on the ever-successful Seahorse Kontiki, and over 13 years of Kontiki production, the GPS Seahorse Kontiki has many improved features that help the GPS Seahorse perform better than ever. 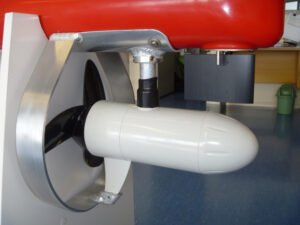 The success of any autopilot system is based around the rudder. Following proven yacht design principles, Seahorse has developed a balanced, hydro-dynamic-shaped rudder that will work in the rough and tumble of surf, where control is needed. The aerofoil shape of the rudder ensures it will work in the aerated water of the surf zone, compared to a flat metal plate rudder that will struggle to work in these conditions.

The GPS Seahorse body has been designed to get the rudder and the motor as far forward as possible to ensure the best possible directional stability. Being forward, the rudder gets maximum leverage on the pivot point, allowing a smaller rudder to be used, which helps to reduce drag, ensuring maximum distance. 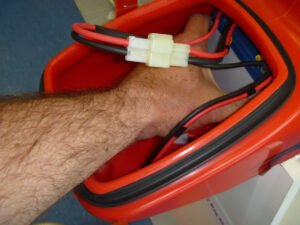 This allows easy fitting and removal of the batteries, as it is now possible to put your hand into the Kontiki and hold the batteries as you insert or remove them. The access hole has a higher lip, with a bullnose ridge that holds the hatch seal in place. The newly designed hatch spider has three fingers to allow better and quicker fitting of the hatch.

This hatch is user-friendly, easy to use and the most secure and best-sealing hatch on the market. 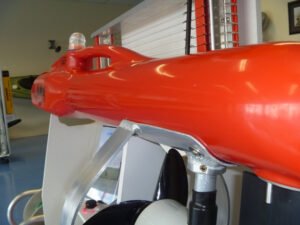 efficiently as possible, to achieve levels of performance previously not possible. The new body is a direct development of the very successful Standard Seahorse Kontiki body. The body is very streamlined to allow it to slide through the waves while staying balanced and level. The motor and rudder are as far forward as possible, which is the best location for keeping the Kontiki going straight. The handle is longer and balanced with or without batteries, making it easier to carry. The hatch is the largest possible to allow easy fitting and removal of the batteries, and the battery position perfectly balances the Kontiki unit in the water, so no power is lost bouncing around in the waves. The Seahorse Kontiki is one of the best-balanced cuts with a smooth path through the surf.

The Seahorse Kontiki units have no drag-producing fins or keels to slow the Kontiki down. The motor frame is a clean and simple design and perfect for the job, and the flat bottom of the frame ensures the GPS Seahorse will stand and not fall over.

How Does GPS Seahorse Steer So Well

We started with the Standard Seahorse Kontiki, which has an incredible ability to self-steer through varying side currents and waves. This is a unique ability unmatched by others on the market. The long body length of the Seahorse Kontiki allows for unrivalled longitudinal steering stability. The offset tow point and the forward-mounted motor ensure maximum resistance from waves and rough conditions. The long, low body acts as a rudder, removing the need for drag-inducing keels or fins. The low buoyancy design also gives the Seahorse the ability to dive under the breaking surf and avoid being washed off course. We have found the line towing behind the Seahorse Kontiki works like the tail of a kite, and this helps to keep the unit straight. The low drag, forward-mounted rudder gives the GPS Seahorse the ability to steer and change direction, therefore keeping the Kontiki unit heading in the direction you pointed it in.

Why We Use The Technology We Use

When Seahorse decided to develop an autopilot Kontiki unit we looked at the different means of controlling direction. We first looked at using a compass, as this seemed an easy and simple way of doing it, but the more we looked into it, the more we discovered it wouldn’t do the job we wanted to be done. With a local Tauranga Boys High student, as part of his technology course, we built a prototype to test the concept, and that highlighted many issues.

We also found the compass would keep the Kontiki unit following a compass bearing and side currents would pull it along the beach. This is because a compass knows where it is pointing, but not where it is heading We also found this behaviour removed the ability of the Kontiki unit to correct itself by tacking into the current, and the compass-controlled Kontiki would end up further along the beach compared to our standard Seahorse.

We then looked at using just a GPS unit, but there was no easy way of telling it where to go. A GPS unit only knows where it is, and cannot tell what way it is pointing We found it was difficult to set a course, but once launched, it kept track of itself and kept the Kontiki on course.

We finally decided to combine the two and use the strengths of each approach. We now use the compass to find and fix the bearing or course you want your Kontiki to follow, and we just the GPS technology to track the Kontiki’s progress along this course, and instruct the rudder to turn to keep everything on course.

When then developed the system so you can use it on any beach in the world and it will go where you point it. No one else can do this. 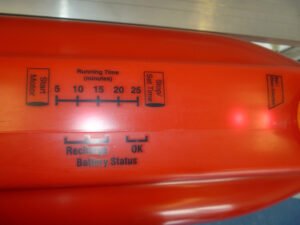 There was a lot of hard work and money spent to make the autopilot function as easy as possible to operate. Simply place the GPS Seahorse Kontiki on the beach, pointing in the direction you wish it to travel. There is no need to adjust or allow for side currents, as the GPS Seahorse will do that for you. Ensure the GPS Seahorse is clear of the winch, and motor vehicles, to ensure the electronic compass is not affected. Plugin your batteries and attach your line. The GPS control unit takes between 5 to 30 seconds to get a lock on the satellites, followed by another 3 seconds to get a solid bearing lock. The controller calculates the way-point the Kontiki will steer towards, and it also will show the 2 lights indicating the course is ready to be locked in. At this stage, you can lock the course in by swiping the magnet over the sensor, or if needed, the Kontiki can be moved to a new heading. If moved, the control panel will return to a single light, showing the autopilot is getting a lock on the new heading, and after 3 seconds the 2 lights will indicate the course is calculated and ready for you to lock into place.

You can now set the time on the motor controller and launch the GPS Kontiki after the motor has been started. The Seahorse Electronic motor Control Unit and the Autopilot control unit are completely sealed in resin. This resin block is fitted into the polyethene body and is held in place with moulded anchor points. The electronics remove a mass of wiring allowing a clean and simple battery compartment. There are two connecting leads showing to attach the two batteries.

On the motor control unit, a row of 10 super-bright LEDs, which shine through the body, indicates your battery status and will indicate if the batteries need charging. The LED lights show the pre-selected running time of your Seahorse. The amount of time is indicated by the number of LED lights which illuminate in a bar display. Once the time is set simply start the Seahorse motor by putting the magnet near the START switch. You can run the Seahorse until the low battery cut-out switches it off, or you can set the timer to 25, 20, 15, 10 or 5 minutes run time.

The LED light flashes fast to show the motor is running, and on the Seahorse GPS 46, the lights will flash slowly to show when slow speed is selected.

The Seahorse Kontiki are the only Kontiki with a built-in automatic stall protection system. If the motor is stalled, the control unit will automatically stop and start the motor up to 3 times trying to dislodge the offending item. – an essential feature for shingle beaches.

The graphs show the performance of the Seahorse Kontiki. These are based on the results from various runs recorded by GPS.

Below are a selection of our instructional videos. To view all our videos, please go to the bottom of our resources page – click on the link, or view it below.

GPS – How it works

Speed Controller – How it works

There are no reviews yet.

Be the first to review “GPS Seahorse Kontiki”Cancel Reply